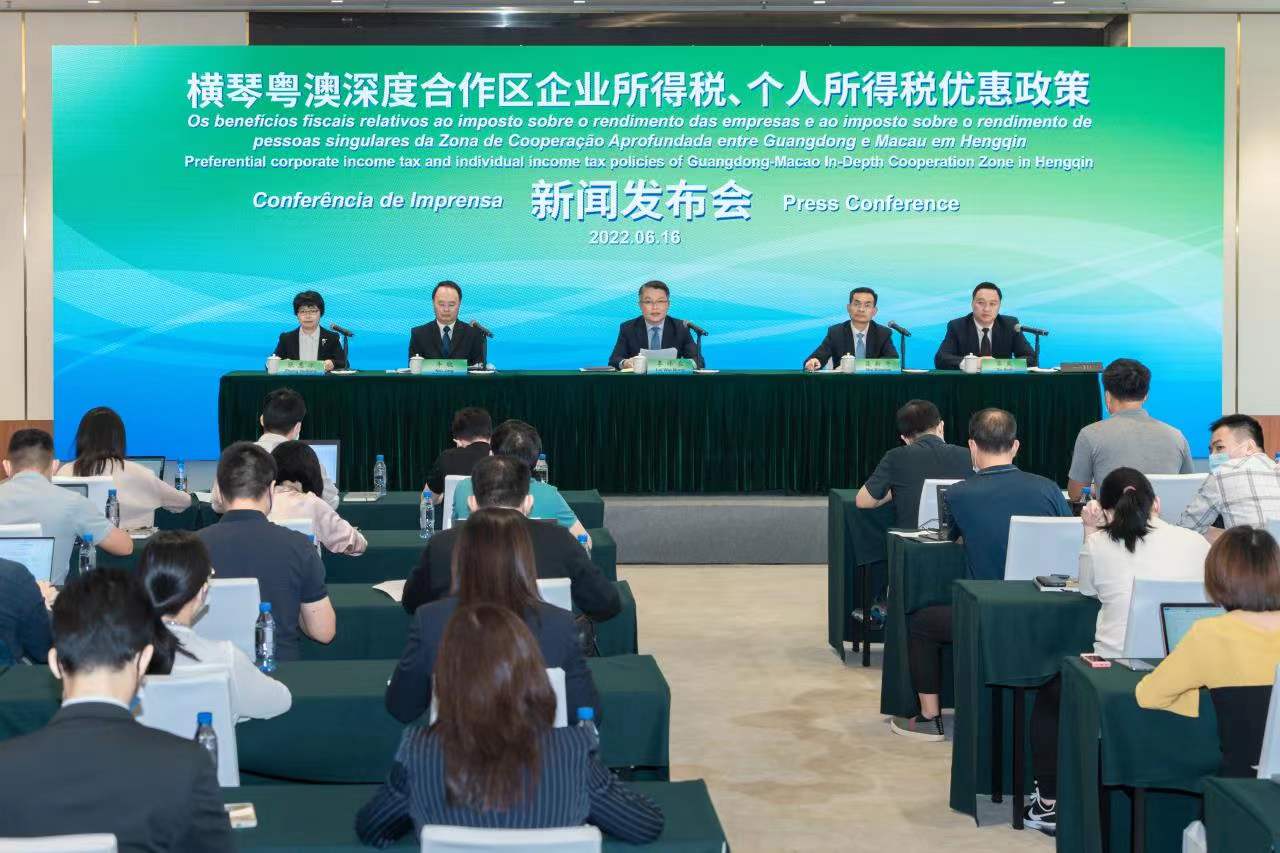 The comprehensive development plan for the construction of the Guangdong-Macao Deep Cooperation Zone in Hengqin, which was released in early September 2021, stipulates that qualified industrial enterprises will enjoy a preferential corporate tax rate of 15%, while personal income tax the rate for high-end and urgently needed talent in the area will be capped at 15%.

Lei pointed out that this first batch of tax policies by the country and Guangdong Province will provide political support and benefits to Macau businesses and citizens in Hengqin, creating a tax environment similar to that of the SAR.

The preferential personal income tax policies provide a similar tax environment for residents of Macao, aim to enhance economic exchanges between businesses and residents of the two regions, and facilitate the integrated development of Hengqin and Macao, noted Nie Xinping during the press conference.

In addition, the measures will consolidate the industrial base of Macao’s moderate economic diversification by benefiting the four key industries of science and technology research and high-end manufacturing, traditional Chinese medicine as well as other iconic enterprises, industries covering culture and tourism, congresses and exhibitions. , and modern finance.

Expanding the range of beneficiaries will also attract more domestic and foreign talent to Hengqin, improve the competitiveness of local enterprises and boost employment.

Earlier this year, notices from the Ministry of Finance of Guangdong Province and the Guangdong Provincial Tax Department of the State Tax Administration specified the requirements for companies and individuals in the cooperation zone of Hengqin benefit from tax reductions or exemptions, which will reduce the tax burden for eligible enterprises and individuals in the area, reduce the differences in tax burden between Hengqin and Macau, facilitate the industrial development of the cooperation area and strengthen the development moderately diversified economy of Macau.

A reduced corporate tax rate of 15% will also be applied to attract more market entities, especially Macau-funded enterprises, to participate in the construction of the cooperation zone.

Meanwhile, the portion of personal income tax exceeding 15% for domestic and foreign talent in Hengqin will be exempted.

Macau residents working in the zone will also be exempt from the portion of their individual tax burden exceeding Macau standards, while their tax burden in Macau will be calculated with reference to the relevant provisions of Macau tax law on income tax. professional and additional income.

It is to help Hengqin become a new home for Macao people to live and work in, and lay the foundation for a new system of high-level integration and openness with Macao.

Hengqin’s preferential corporate income tax catalog first introduced in 2021 will also be expanded to include nine categories of 150 items such as IC design, AI products, etc.

In 2014, the Ministry of Finance of China and the State Tax Administration of China granted a preferential corporate income tax rate of 15% for encouraged industries in the former Hengqin New Area .

The preferential catalog included the tourism industry in 2019, covering six categories of 80 items with specified main business income accounting for more than 70% of total businesses.

The new corporate tax catalog will specify that the main income of the company must be 60% of the total companies, which will allow a greater number of companies to be eligible for the dividends of the policy.

Macao’s characteristic industries such as business brokerage, agencies and service industries between mainland China and Macao and Portuguese-speaking countries are also included, aiming to strengthen the agglomeration of scientific and technological innovation elements, the development of culture, tourism, congresses and exhibitions. industry and building a financial services platform between China and Portuguese-speaking countries.

To encourage tourism, modern services and high-tech enterprises in the cooperation area to improve their international competitiveness, newly added foreign direct investment income will be exempted from corporate tax.

In addition, one-time pre-tax deduction or accelerated depreciation is allowed under different value ranges for capital expenditure of Hengqin-registered enterprises, which will help them reduce costs, expand investment, and promote transformation and business. industrial upgrades.

In terms of implementing preferential policies for personal income tax, the scope of beneficiaries has been extended to domestic and foreign skilled talents and urgently needed talents in the cooperation area with a rate of preferential taxation capped at 15%, aimed at attracting more qualified talent. staff at Hengqin, Zhang Huibing, noted at the press conference.

More convenient and efficient means of annual settlement for the application procedure for individual tax subsidies without additional applications are also adopted for taxpayers.

Macau residents working or doing business in the area also benefit from the new tax policies.

“For example, a Macau resident, who was only employed in Hengqin in 2021, earned a monthly salary of around MOP 20,000 (USD 2,474), which is equal to the average income of Macau residents,” said noted the committee during the press conference. statement.

“His overall annual income was around 220,000 RMB (32,736 USD) calculated over 13 months. In accordance with the relevant provisions of the national personal income tax law, his income tax payable was approximately RMB 14,000 without taking into account the tax relief. After applying the preferential policies, he only has to pay personal income tax of about RMB 2,300, which is consistent with Macao’s corresponding tax burden on this part of income”.

The cooperation area will also develop an online auxiliary system for Macao taxpayers to calculate the amount of tax deducted or exempted in accordance with preferential personal income tax policies, submit applications online and receive tax refunds without going to the tax office. .