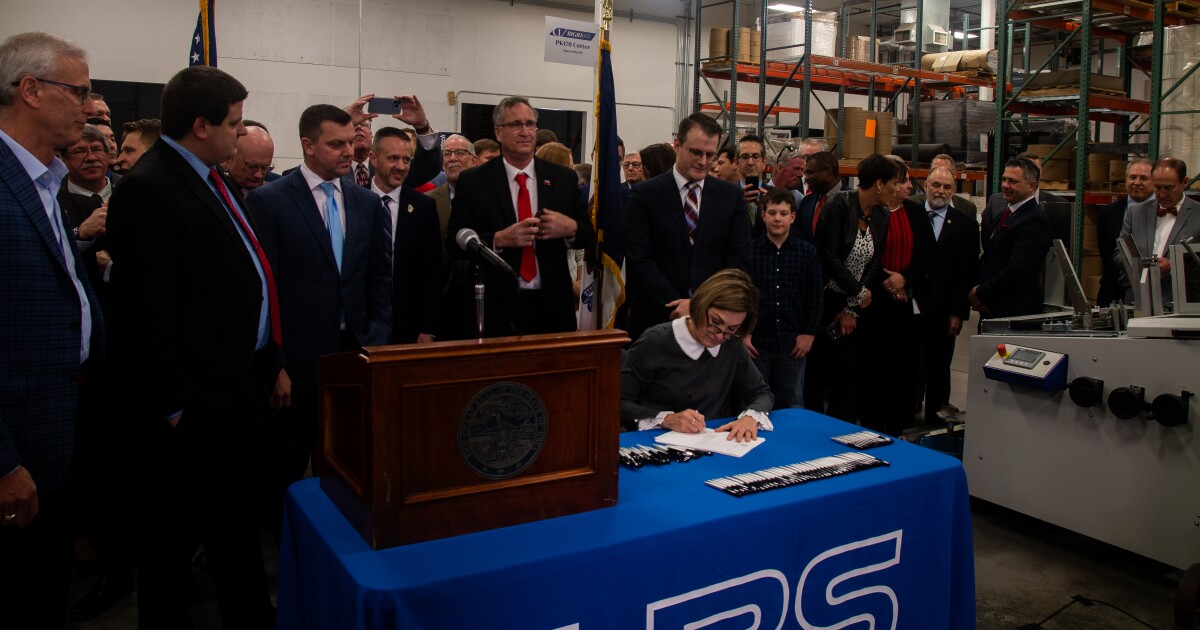 Iowa Governor Kim Reynolds signed a major tax cut package on Tuesday, completing her top priority for the legislative session just hours before she is expected to deliver the Republican response to the speech on the state of the union.

“Today is a great day for the State of Iowa as we radically reform Iowa’s tax system for the better and make our state one of the most competitive in the nation,” Reynolds said.

the new law Phase in a fixed income tax of 3.9% by 2026, while preserving existing tax credits.

It will eliminate state taxes on retirement income starting next year and introduce new tax breaks for retired farmers and people retiring from employee-owned businesses. The corporate tax rate will also be reduced over time, along with reductions in certain corporate tax credits.

Reynolds signed the law at a local manufacturing facility surrounded by a crowd of Republican lawmakers.

Senate Majority Leader Jack Whitver, R-Ankeny, said it was a historic day. He said Republicans were keeping their promise to return taxpayers’ money to Iowa in the event of a budget surplus.

“In this post-pandemic economy, competition is fierce for jobs and workers,” Whitver said. “And this bill will ensure that Iowa will compete for those jobs and those workers.”

Senate Minority Leader Zach Wahls, D-Coralville, criticized the tax cuts for giving the most benefits to the wealthiest Iowans.

“We certainly feel like Governor Reynolds didn’t govern for all Iowans,” Wahls said. “She ruled for those who are at the very, very high level.”

Democrats have proposed expanding the Earned Income Tax Credit and the Child and Dependent Tax Credit, but the majority of the GOP rejected those ideas.

“What we saw happening last week was rushing a $1.7 billion tax bill so that [Reynolds] might have something to say tonight on the national stage,” Konfrst said.

Asked about the timing of the tax cut deal, Republican Statehouse leaders pointed to the fact that they began working on tax policy much earlier in the session than they usually do and that tax cuts were their top priority for the year.

Intertrust N: How to Navigate the Singapore Tax System