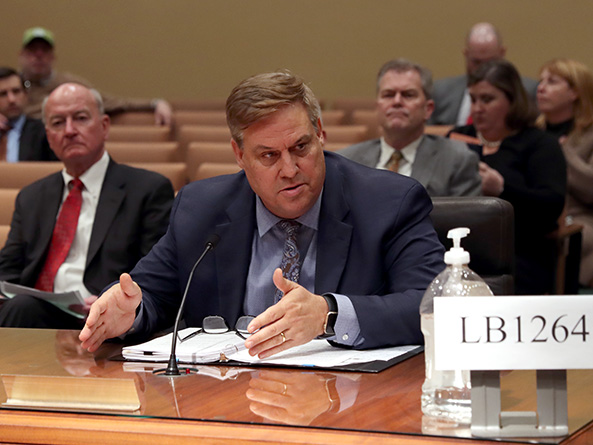 Nebraskans with taxable income below $50,000 would pay no state income tax under a proposal heard Feb. 23 by the Revenue Committee.

Omaha Senator Mike McDonnell, sponsor of LB1264said the proposal is based on a Blueprint Nebraska Initiative tax modernization plan.

McDonnell said the changes are intended to grow the state’s economy by helping Nebraska compete with other states for the middle-class residents needed to fill current job openings.

The bill would reduce the number of personal income tax brackets from four to two starting with the 2022 tax year. The lower bracket, with a rate of 0%, would apply to taxable income ranging up to $49,999 for singles and up to $99,999 for those married filing jointly.

The bill would also reduce state corporate income tax rates. Beginning with the 2022 tax year, it would set the lowest rate, which applies to the first $100,000 of taxable income, at 4%, down from the current 5.58%.

McDonnell said LB1264 would end several service sales tax exemptions to offset lost revenue from income tax cuts. These would include entrance fees for entertainment, personal services and the cleaning, maintenance and repair of motor vehicles and real estate.

The bill would also impose a state sales tax on 20% of gross income received for services of physicians, dentists, optometrists and chiropractors and 40% of gross receipts from the sale, rental or hire. durable medical equipment.

LB1264 would end estate tax, repeal standard and itemized deductions, and double the value of two tax credits for business expenses related to research and development.

The bill indicates legislative intent to create two student loan relief programs for graduates in certain in-demand fields and to end most tax incentive programs to compensate for lost income resulting from changes to the law Project.

Lance Fritz, CEO of Union Pacific Railroad, testified in support of the proposal, saying it was meant to “reignite” a conversation about tax policy. He said LB1264 would expand the state sales tax base to take into account that services are now a bigger part of the economy than before.

Jim Smith of the Platte Institute also testified in support. He said independent economic analysis estimates changes to LB1264 would attract or retain 70,000 residents over 10 years, including 25,000 people between the ages of 18 and 34.

Smith said the bill would increase Nebraska’s gross state product by $65 billion and generate $40 billion in personal income growth. Additionally, he said, those in the lowest personal income tax bracket would receive the largest percentage of tax cuts under the plan.

Tiffany Friesen Milone of the OpenSky Policy Institute testified against LB1264. She said the bill would cut state tax revenue by more than $1.3 billion a year while failing to deliver the promised economic growth.

Additionally, Friesen Milone said the proposal would shift the burden of paying for government services onto low- and middle-income Nebraskas, because they pay a higher percentage of their income in sales taxes than higher-income residents.

Dexter Schrodt testified against the bill on behalf of the Nebraska Medical Association. If LB1264 passes, he said, Nebraska would be the only state other than Minnesota to impose a sales tax on medical services.

Schrodt said the proposal would drive up health care costs for Nebraskanians, in part because doctors would likely charge a fee per visit to cover the cost of the new tax requirement.

Also in opposition was Korby Gilbertson, who testified on behalf of more than a dozen organizations representing businesses that would be affected by the repeal of sales tax exemptions on the services they provide.

The committee took no immediate action on the bill.

Rick Scott proposed that ‘all Americans’ pay income tax, then denied he did