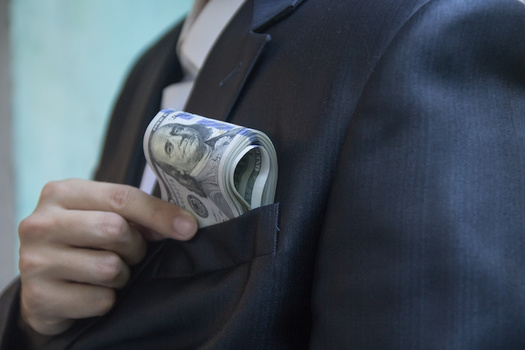 The Biden administration’s “Billionaire Minimum Income Tax” would ensure that U.S. households worth more than $100 million pay a tax rate of at least 20% of their total income.

West Virginia Citizen Action executive director Gary Zuckett said the move could add between $220 and $335 million a year in federal grants to the state budget.

Zuckett explained that federal grants fund state programs and services, such as Medicaid and CHIP, Head Start, and food and nutrition programs.

“Businesses and extremely wealthy people should pay their fair share of taxes“, Zuckett said. “And those revenues should be used to help pay down debt, help reduce drug prices and help deal with the climate. The majority of West Virginians and the majority of taxpayers across the country would agree with that.”

He added that loopholes often allow the nation’s wealthiest to pay little or no federal income tax, while allowing them to generate untaxed income from their investments.

An expose from last year by ProPublica based on IRS data revealed that for the past several years, Elon Musk, Jeff Bezos and other top billionaires have paid no federal income tax.

Census data shows West Virginia has one of the highest poverty rates in the country. Zuckett said the country’s failing tax system worked against residents.

An Oxfam report published earlier this year found that the wealth of the world’s ten richest men has doubled since the start of the pandemic – soaring to more than $13 trillion last November, a bigger increase than seen in the decade and a half previous combined.

Disclosure: The West Virginia Citizen Action Education Fund contributes to our fund for reporting on policy and budget priorities, the environment, health issues, and social justice. If you would like to help support news in the public interest, click here.

Personal care homes provide housing, meals and other forms of assistance to seniors and people with disabilities. The state funding proposal would increase additional monthly payments homes receive to provide care for Social Security recipients from $37 a day to $76 a day.

“This much-needed increase will allow nearly 500 personal care homes to invest in staff, facilities and infection control,” Snead said. “Which will help residents and staff in these homes be safer and promote better care, safety and quality of life for both residents and staff.”

The proposal would mean additional funding of $50 million. Pennsylvania has not increased supplemental payments to personal care homes since 2006. Budget negotiations are ongoing at the General Assembly and are due to be finalized by June 30.

Xzavier Hunter, owner/operator of Hunter Cottage, a personal care home in York, said increased funding is essential to solving a housing crisis in the city and across the state, especially for the elderly and people with disabilities who have limited incomes.

It remains unclear whether the federal government will make last year’s expansion of the Child tax credit. In the meantime, Minnesota supporters have argued that the state could step in and approve its own version to prevent families from falling off the financial cliff.

A new report of Washington University in St. Louis said the temporary federal expansion has allowed families to eat better and depend less on credit cards to survive.

Ryan Hamilton, government relations associate for the Minnesota Catholic Conference, said it’s a great case study for trying to reduce poverty. But he stressed that this had been short-lived for many households who could benefit from additional support.

“A Minnesota child tax credit would be a huge benefit to families who are at or near the poverty line,” Hamilton argued. “And those families who are facing the rising cost of food and basic necessities due to inflation.”

Unlike the federal credit, which already existed and has been expanded, Minnesota would have to adopt its own framework. There is no specific proposal at this time. Proponents have called on policymakers to pass a fully refundable tax credit to put more money in the hands of eligible households. Amid a large budget surplus, both major parties have expressed a desire for tax relief, but have different ideas on how to do it.

Hamilton pointed out that it could serve as a recruiting tool for families to move to Minnesota or compel current residents to start families of their own. He noted that there is real concern with rising costs for so many basic needs, the decision to raise children is more complex than before.

“This demographic cliff will put a strain on our state budgets,” Hamilton said. “Because we will have fewer workers, fewer taxpayers and more people receiving government services.”

Data from the Centers for Disease Control and Prevention shows that Minnesota has experienced a declining birth rate for many years, reflecting national trends.

Hamilton added that a new credit could help the state become a national model by turning the tide.

Groups such as the Children’s Defense Fund worry that families briefly aided by the federal expansion could slip back into poverty after it expires. Researchers at Columbia University reported that it happened to nearly four million American children when temporary advances stopped credit.

Disclosure: The Children’s Defense Fund-Minnesota Chapter contributes to our fund for reporting on policy and budget priorities, and children’s issues. If you would like to help support news in the public interest, click here.

Students, staff and faculty in public higher education are highlighting the growing problem of campus debt held by state colleges and universities, and its effect on tuition fees.

While the state paid for construction costs on public college and university campuses, individual campuses have more recently had to take out loans to finance construction projects. Income from ancillary services such as student housing and board is often used to pay down debt.

Joanna Gonsalves, a psychology professor at Salem State University and a member of the Massachusetts State College Association Salem Chapter, said the fees increased to make up the difference.

“These debt payments range annually from a few million to UMass Amherst, which pays $95 million a year in debt service, and that’s unfair,” Gonsalves said. “We feel like it’s a generation of students who are being taxed for buildings rather than taxpayers.”

Gonsalves noted that when students weren’t living in dorms during the pandemic, the loss of income brought the issue of campus debt to the fore. She added that the UMass system owes $3 billion and other state universities owe $1.2 billion. Groups are calling for more state investment, as well as higher taxes for the Commonwealth’s wealthiest residents.

Tyler Risteen, a sociology student at Framingham State University, said enrollment rates at her university were down.

“Me, personally, and I know a lot of my friends that I go to school with, they chose these public schools because it’s supposed to be cheaper,” Risteen explained. “The government is supposed to help us, but in reality it’s just the schools taking out loans and then we pay those loans.”

Gayathri Raja, a sophomore in economics at the University of Massachusetts-Lowell, said there’s a feeling colleges are raising tuition and fees out of greed, but she thinks there’s has a bigger structural problem.

“They are allowed to sit on a good amount of assets, despite having so much debt,” Raja pointed out. “And it’s not even a college’s fault. That’s how the financial system is built, and it’s kind of up to the state to step in and help with the incredible debt of the state colleges.

She said voters in November will be able to approve or disapprove of what is called the Modification of equitable sharing, which would raise the tax rate by four percentage points for those earning more than $1 million a year, and direct those funds toward education. Opponents fear such a tax could drive high earners out of the state.